A Challenge to Jablonski Supporters… 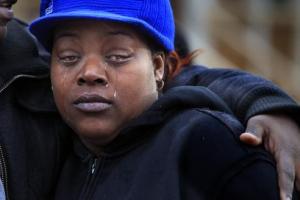 Marsha Mayes, mother of Terrell Mayes, was comforted at the vigil. Three-year-old Terrell Mayes Jr. was killed recently when he was struck by a stray bullet. Photo Jim Gehrz Star Tribune

This post is dedicated to Terrell Mayes-  a three-year old Minneapolis boy who was killed by a stray bullet as he ran into his house and away from gunfire.  His story is more tragic than Jablonski’s…his family deserves justice and there is no reason those who have money enough to support injured hockey players can’t donate money to help this family too.

Don’t get me wrong, I have been incredibly impacted by the injury to Jack Jablonski. Actually, just read my blogpost about it.

It rocked our house…I could see our son in the smiling face of that kid.  I could hear my voice in the teary-eyed interview of the mom.  My throat gets an immediate lump EVERY time I see Jack’s younger brother skating to center ice of some game that has been dedicated to help support his brother.

I’m equally affected by the injury to Jenna Privette. There are two girl hockey players in our house, and I have a sneaking suspicion one of them is going to be the source of many scary moments for me. Jenna’s family seems to be a bit more private, so it is a little harder for me to completely connect there.

That lack of connectedness is part of my challenge.  The outpouring for Jack has been unbelievable…mind-blowing really. I connected from the start and so did a million other people. I’m starting to feel a bit uncomfortable with all of it, however.

There is the discrepancy in overall support between the male hockey player and the female hockey player, but if there is any blame to place, it is on the fact that Jenna’s camp isn’t as effective as the supporters of the Jablonski’s. Jack is surrounded by marketing and promotional geniuses. He’s on Facebook and Twitter. He has a hashtag and an army of tweeters and retweeters. Take a look at Jack Jablonski’s website. It’s professional and organized and already running like a business. There are places for merchandise sales, and a map of where donations have rolled in from all over the country.   I am part of that tide…because I’m connected.

It’s about having the right resources, the right connections, the ability to raise your voice well and have someone listen.

The hockey community is an amazing community…made up of some of the best and brightest. Jenna will have all the support she asks for.

Hockey people are online…and if enough noise is made…they will respond in kind.

Let’s face it, there is NO WAY there would be the buzz about #Jabs if it were not for the ease of social media. (and the group of people who were so immediately proficient with it)

I should be thrilled, right? I am part of a community that really does take care of its own. I think what I’m starting to realize though is that I am part of a Private Sport. It’s an exclusive club. We’re talented, generally affluent, successful people who can afford to keep our kids playing an expensive sport. We look in awe at what we, as a community, have been able to do in such overwhelming support of Jack and his future struggles…and we should be proud.

We should also be challenged.

The thing is, Jack is going to be just fine.  He has an amazing family, the support network of thousands of loving and dedicated people, and by the time all of this fundraising is done, he will likely have enough in his coffer to invest well and cover costs.

Maybe the Jablonski Foundation can support causes outside of the hockey community.  Maybe some of the money we raise can go to places like the Mayes family…a reminder that just because their online community isn’t as established or as effective… Terrell Mayes’ life means just as much.

Last I checked, the Crime Stoppers effort to raise money to find Terrell Mayes’ killer had collected $5345 of the $10,000 goal. If you have an interest in donating…click here.

To learn more about Meagan Frank , you can visit her website.  www.meaganfrank.com