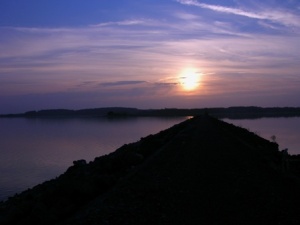 A friend of mine recently sent me an article about Tim Tebow. She explained that she would be impressed if even half the stories in the article were true. I agree with her.

Rick Reilly, ESPN sportswriter, compiled a number of stories that put Tim Tebow above his competitors.  The article doesn’t talk about his overwhelming athletic prowess, or his fundamentally perfect throw…that would be pure fiction. What the article addresses instead is why Mr. Reilly has come to believe in Tim Tebow because of what he does off the field. I won’t attempt to write the story again, it’s a fantastic piece just the way it is, but I want to point out the value of playing with perspective.

When Tebow focuses on people around him, he becomes a better competitor.

Tebow distracts himself with the bigger picture.  He plays for someone every game…a sick someone, a dying someone, a hurting someone. He spends time with these people and he focuses on them, before becoming too self-absorbed with his own successes. This is how he motivates his team…and an entire fanbase has emerged celebrating this approach to life… and competition.

There are opportunities for youth teams everywhere to tap into this approach to sports. Not only is it possible…it is necessary.

Kids are naturally self-absorbed. They can’t help it, really. Because of that, it is imperative that the adults around them foster available opportunities to think outside of themselves.

Our oldest son has had two such opportunities this year, and I can say, without a doubt, it has worked to shape who he is becoming.

In response to Jack Jablonski’s tragic injury, my son has played the majority of the season with “Jabs #13” written on his stick.

He talks often about playing for Jack and wanting to play his hardest because Jack can’t anymore.

This has been an impactful experience in the formation of his identity. He recently wrote a realistic fiction piece from the first-person perspective of a paralyzed hockey player. His main character spent pre-game time deciding for whom he would be playing the game that day, and then, after the paralyzing hit, internalized that he would still be able to help people even if he were injured.

This was insight…real, tangible insight… into how important this experience has been for forming the characteristics we hope to instill in him.

The second growing experience included an effort that involved his entire team. The team’s coaches and managers caught wind of the fact that a player from an opposing association was recently diagnosed with Burkitt’s Leukemia.

They seized the opportunity to show the boys how to think outside of themselves, and that when a team of people come together, fantastic things can happen.

Within days, pairs of blazing orange socks with a black “croix” insignia, were a part of their uniform. 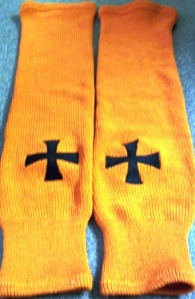 Croix Hurtis is the name of the young man who is facing the cancer diagnosis with grit and determination. You can visit his Caring Bridge site here.  He is from New Richmond, WI, and the team colors happen to be orange and black. In addition, and somewhat ironically, the color of the cancer ribbon for Leukemia is also orange.

Our son’s Stillwater Peewee B1 team wore the socks last weekend, in tribute to Croix , and raised money to accompany a shadow-box cancer ribbon display that was constructed out of a pair of those same socks.

Through this entire week, and leading up to a fundraiser that is happening for Croix this weekend, the Stillwater Squirt B team is now wearing the socks.  The socks will then be passed on to a team in Croix’s association so the tribute and supportive efforts can continue.

Does wanting to play for someone in need make athletes better athletes?  Not always.

I do believe, though, that shifting perspective enough to see the world through big-picture lenses gives athletes…and people…an opportunity to navigate life in a better way.  It opens up possiblity, taps into an innate human desire to leave a mark…to make a difference.

Just imagine if community service and intentional outreach were more than just an occasional conversation in the sports locker rooms across this country.  What if that were the everyday language? What if the big picture were the only picture upon which coaches, players, refs and parents focused?

The opportunities are there…for everyone. It’s just a matter of taking them when they come.

To learn more about Meagan Frank or her current book project, visit her website: www.meaganfrank.com.

Tagged as: big picture, character, focus on others, perspective, playing for causes, support