The Youngest Athletes Need Caring Coaches Who are Comfortable with Chaos 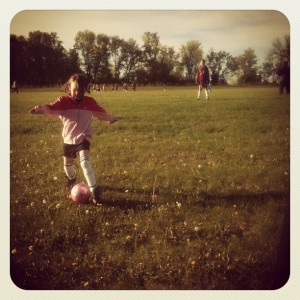 In our house it looks like chaos…pretty much from start to finish. Both the girls are playing and, in what seems like a purposeful punishment for our family, their practices are scheduled on the same days…at the same time…and of course at two different places.

I’ve made it work (even without my second driver). I get our oldest son set up with carpools for wherever he needs to go, and then the girls and I start running.

I drop off Middle Sprout and peel out of the parking lot as soon as I see her coach step out of his car.  Little Sprout and I arrive late to her practice (doing what we can not to disrupt things) and then I assist with the drills before we leave a few minutes early to go back and pick up her big sister. (who is usually waiting for me to arrive… with her coach)

I think after the craze of yesterday, Little Sprout finally understands why I was not able to take on the responsibility of head coach for her team this year. Six-year-olds need a coach who is there before they are and who can stay after they’ve gone.

The thing is, it took a while for another parent to step up and take on the role of coach for this little U-6 team. I felt badly that I couldn’t volunteer…but it’s clear why.

The man who eventually volunteered did so reluctantly. He admits he doesn’t know much about soccer and that he has not worked much with kids this age.  The thing is…he’s perfect for them without trying. He is kind, patient…and learning.

The girls LOVE him…and they are starting to love “soccer”!

I put parentheses around “soccer” because what is happening for this young developing team of athletes is not soccer the way that I know it…and it shouldn’t be.

It’s good that their coach doesn’t see what I see when I watch the girls try to kick… or dribble… or shoot. I see areas that I would love to correct and it takes every bone in my body not to point out when they do it “wrong”. He is working to learn names, understand the drill description in the association practice plan, and then it looks like herding cats to run them through the important games of tag, or red light/ green light. He lets them choose games and in doing so…they are a part of the process.

A couple weeks ago, I wrote a blogpost about The Need for Creative Athletes. In the post, I challenged youth coaches to allow for creativity in their practice plans. My daughter’s coach may not be planning it…but it is great that it is naturally happening anyway.

I recently read an awesome article entitled, The Courage to be Patient. It is a directive to youth soccer coaches, and it highlights the discipline it takes to truly adopt the best way to develop young athletes.

I’ve decided: allowing creativity is harder… the more experienced you are.

A friend of mine, who is the head coach for her daughter’s soccer team sent me a message about what she did to create a space of expressive and creative freedom for her players. I take to heart this decision because I know my friend well.  She is arguably one of the most intense competitors I have ever been around.  She and I were college teammates, and I know firsthand her intelligence of the game, her competitive edge, and her impressive work ethic.  Here is what she did:

Each player received a name tag that said “Meagan’s choice” for the practice. I warmed them up for a couple of minutes (only because it was cold and I didn’t want them to get hurt). From that point, the girls had control of the practice. Each player could turn in their sticker and then choose whatever game they wanted to play. They could repeat a game if they wanted…so we played sharks and minnows a couple of times. Or they could choose a game. Obviously, they call choose to play “soccer” games such as Clean Up Your Own Backyard (which I call poop in the yard…they laugh), Number Soccer, etc.

What I’ve started to learn about the developing athlete, is that my daughter’s reluctant coach is providing an environment that is perfect for the needs of the kids at this age. Young kids need space to run in chaos.  They learn about collisions…and how to avoid them next time. They learn the ways that make it easier for them to keep the ball on their feet…because they don’t want to lose the game. They learn that laughter is part of sport. My friend had to make a conscious decision to have some courageous patience…but the players on her team will be better off for it.

It is counter-intuitive to allow creative chaos. Every one of us would rather have control…the thing is, kids need a chance to have some control too…and that feels a bit chaotic for us adults.

To learn about Meagan’s current book project make sure to visit her website:  www.meaganfrank.com.