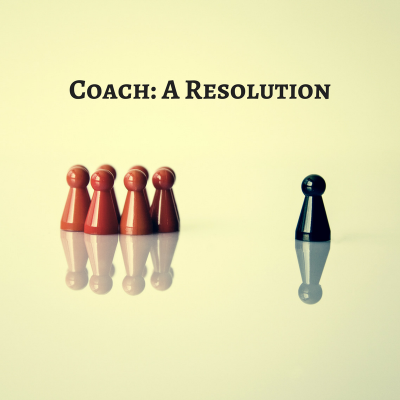 I adopted the hashtag #closethegap as my focus for last season’s team. There exists a profound skill/commitment gap between our team and the teams in our conference. People have pointed to our high school’s championship football team for some of the gap that exists, and I would be foolish to pretend football doesn’t matter. We are in a small western Wisconsin town and the number of students participating in athletics makes same-as-football-season boys’ sports somewhat disadvantaged. Demographics, too, make it tough for us to compete with some of the communities that have more resources, both human and material. None of those factors can be an excuse, however, and I refuse to play the blame game.

I have a responsibility for the growth and success of this soccer program and plenty of recent self-reflection has led me to my current resolution. I don’t want to call it a New Year’s resolution because then it seems as though I only intend to be resolute for the new part of the year or for one year only. I am resolving to make changes in how I coach, in how I approach coaching and the decision to do something, about a craft I have studied and worked at for over twenty years, is a big deal.

I blame Kate Leavell, author of Confessions of an Imperfect Coach, for this recent surge of inspiration. The perfectly-timed arrival of her book on my desk has tied together a number of the loose thoughts that have been swimming in my head for years.

I have been a somewhat fraudulent coach. Ok, maybe fraudulent is a strong word, but I know I haven’t been “all in”.

Every single coaching job I have had has been an “emergency” one.

The first team I coached was a premier u-17 girls team in Colorado. The club director asked me to coach them after their coach was caught partying with one of the players. I steadied the ship mid-season and coached them one more year before we moved out of state.

The next coaching job I had was as the head women’s coach at UW-Stout. I was hired one week before the season started. A literal emergency hire and one of the hardest things I have ever done. That emergency lasted for five years.

Next up: a U10 girls team in Woodbury and a couple youth co-ed teams in Menomonie. For each team, they needed someone to coach and I reluctantly raised my hand.

My current job as the head coach for the Menomonie High School boys team was one I hesitated to pursue too. For two years, as a parent, I watched from the sideline and struggled to coach our son through the difficulties of being on a team that lacked a positive culture or a stabilizing voice. When the revolving door began to spin again, for what would be the third coach in four years, I found myself sitting across the desk from the Athletic Director in an interview before I realized I was doing it again. I was agreeing to take on a struggling program in peril.

So here I am. A seasoned coach who has told herself for twenty years, coaching is a temporary position, a part-time gig.

What if it’s not, though? What if coaching is exactly what I am supposed to be doing? What if I pursued it completely and decided to get as good at it as I can?

My response would be, “well then, I have a lot to learn and even more to do.”

All of this brings me to my new resolution.

A Bing search of the definition of resolution yields the following:

So, my firm decision? To pour myself in to coaching others. Sometimes it will look like soccer, but most of the time it will look like parenting, advising and teaching. I totally want to set up a booth at the end of my driveway like Charlie Brown’s friend Lucy that solicits “Help” for 5 cents.

The problem I want to solve? Inspiring those around me move toward the best versions of themselves. (another book influence: Perfectly Yourself: Discovering God’s Dream for You, by Matthew Kelly)

The process and separating into components? That’s goal-setting. I have a new hashtag for this year.

I want to create spaces for people to grow and set aside time to be there with them as they do. It’s actually something my husband and I have been trying to do for our kids and our summer employees without really having the hashtag to describe it.  I want to bring that to the teams, athletes and fellow coaches with whom I work. How I’ll measure that daily, weekly or monthly is something I’m still exploring and I’ll spend more time with this concept in future blogposts.

For now, I wish you the very best in your own resolutions. May you make your own firm decisions to problem-solve for the good of those around you and find purpose in the pursuit.