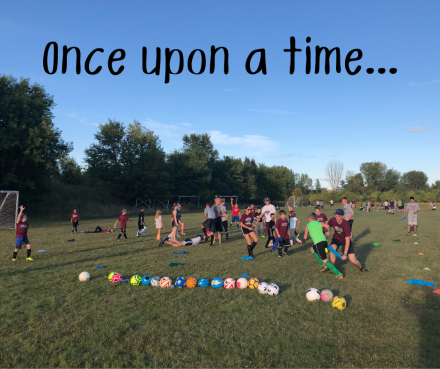 Seven years after I interviewed sixty people about their sports parenting experiences, I interviewed thirty of them again. One woman would not let me conduct a follow-up interview about her story.  Out of respect for her privacy, I will call her Sharon.

In declining my invitation to chat again, Sharon wrote in an email:

“It has been quite the wild ride for our family and is a long story with many twists and turns.  Unfortunately, while I thought I had a level head on my shoulders as a parent of youth athletes and as a soccer director (even those in the industry need to grow up to learn), I was wrong to have given my opinion the first time we chatted.  This story is my son’s.  It is his journey and his story to tell.  Not mine.”

Her fascinating choices included homeschooling their children (son and younger daughter) so they could make a daily 45-minute trek to 6:00 am individual trainings that would last for two hours and then he would have his team commitments in the evenings. She admitted that they were spending upwards of $15,000 a year on youth sports. Did I mention he was nine and these were choices he literally would not have been able to make on his own?

At the time I asked her if she was worried about whether he could get burnt out. She said, “I don’t care. Why can’t it be that he thoroughly enjoyed what he was doing before a so-called ‘burn-out’?” A big part of me thinks she honestly believed it wouldn’t happen for her children.

I am a bit sad I will not be able to follow up with her completely, but I do know that the sports stories for her children ended much earlier than she would have hoped. I heard through those who encouraged I connect with her in the first place that both of her children suffered fairly major injuries and the struggles with the teenage version of her “passionate” athlete were quite devastating.

So, when should a sports story truly become that of the athlete?

What if I were to contend that she is right and that an athlete has rights to their story from the moment they even think about lacing up cleats, skates or basketball shoes? Do you agree?

It’s a tough assertion, isn’t it? For the bulk of parenting young children, parents author the story. They decide which sports a child might or might not experience, they dictate the level of commitment both in time and money, they organize, shuttle and otherwise navigate the sports stories on behalf of their children.

It would look vastly different if parents saw their role as editors instead of authors: guiding the structure of the story, editing in the places that are not written well, but ultimately following the lead of the child.

This would flip youth sports on its head and sports parenting decisions would be really different:

The best sports stories I uncovered in my research were observed and retold by parents who invested in curiosity about the way their kids’ stories would unfold.  Coincidentally those families were enjoying healthful relationships with their now-grown children.

If we as parents want to raise autonomous children capable of writing their own sports stories, we have to encourage an environment from the very beginning that belongs to them. We also have to help them practice writing it.

Sharon is unfortunately a common character in my generation of sports parents. She doesn’t want to share it with me, but I know the story she has to tell is partially about the battle over authorship. Cultivating the pride that comes when kids are in charge of their own voice is missing in too many families. The shying away from the stories our kids live will happen again and again if we continue to parent in sports the way we do. Anyone who is raising children in the current sports environment can affirm, it can be messy and uncomfortable, and it is hard to resist the temptation to write the best stories for our kids that we can. Changing the way we think about our roles as sports parents can and has to vastly change the way youth sports operates.

Things will be different when we figure out how to let kids author their own stories from the very first line.